Avoiding Overeating During The Holidays 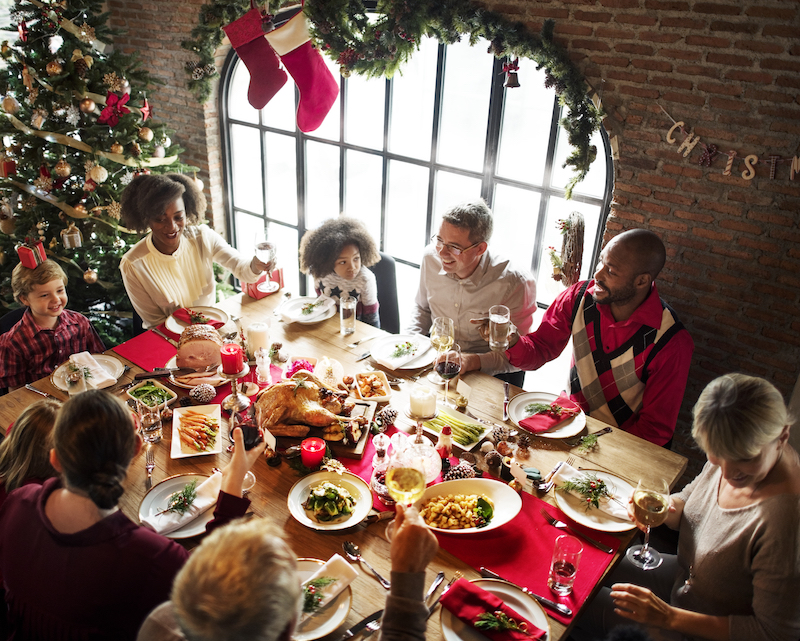 Avoiding Overeating During The Holidays

We’ve all been there. You get to Christmas dinner and only plan to have a few things on your plate. By the time the night is over, you’re in a food coma and food lingers in your stomach like a rock. You can’t even remember everything you ate!

Then there are the delicious leftovers. Roast beef. Mashed potatoes covered in gravy. Apple pie. A cheat meal on Christmas day turns into a cheat weekend. You look at your calendar on Monday and see that it’s December 28. Why not take the rest of 2020 off and pick up your diet in the New Year?

A cheat meal won’t set you back too much if you’re trying to lose weight, but a cheat week definitely will. There’s nothing wrong with enjoying Christmas dinner, but it’s important to remember that you’re always in control of what you put in your body.

Here are some tips to get you through the holiday and kickstart your diet for 2021!

Start each meal with soup or salad: Easing my way into Christmas meals keeps me from paying for it later. A salad isn’t going to fill me up (does it fill anyone up?), but having water and fiber-rich food first helps me from overdoing it on high-calorie or high-fat food later.

Research backs this up as well. A study published in the November 2007 issue of Appetite shows that participants who started lunch with vegetable soup ate 20 percent less than those who went straight into the main course.

Don’t start the meal hungry: This is the same reason why you shouldn’t walk into a supermarket hungry. You walk in to buy chicken and walk out with a cart full of things you probably shouldn’t eat.

Have a snack before the meal starts. My go-to’s are lean protein and vegetables like yogurt, hard-boiled eggs, chicken salad or vegetable sticks dipped in hummus. The goal is to satisfy your hunger so you don’t overeat when dinner starts.

Stay hydrated: Think you’re hungry? You might actually be thirsty. When water levels drop in your body by as little as 2%, it sparks side effects that can include overeating and weight gain.

We’re all more likely to be dehydrated during the winter. The body doesn’t release sweat as frequently as it does in hot weather, so the thirst response isn’t triggered as often. To make things worse, heated areas (like your home) make dehydration worse because they’re creating desert-dry environments that cause fluid in our body to evaporate.

I usually drink 16 ounces of water anywhere from 30-60 minutes before Christmas dinner to help keep consumption under control. Stomach distension is registered by the brain as a signal of being satisfied and can help get rid of those eggnog cravings (bonus: 200 calories, eliminated like that!)

You may have been told that drinking eight glasses of water per day is optimal, but there’s no real science to support that number. Since everyone is different physically, the best way to gauge if you’re getting enough water is to make sure your urine is a more clear color. Darker urine signals dehydration.

Get enough sleep: I train clients as early as 5:00am. There are nights where getting a full eight hours of sleep isn’t realistic, but getting as much as possible helps me make the right choices in and out of the gym.

That extends to the holidays. We all have holiday stress even if our family gatherings are smaller this year or over Zoom. Not getting enough sleep the night before can lead to “fatigue cravings” that lead to overeating.

Psychology Today reports that people who get four hours or less of sleep will consume 22 percent more calories on average. Willpower dwindles as sleep deprivation and fatigue set in. How many times have we all had ice cream or an extra cheat meal when we’re tired? This is in part because fatigue increases levels of Ghrelin, also known as the “let’s eat” hormone.

If a rough night of sleep is unavoidable, try to make all of your food decisions in the morning or pack up snacks the night before. This is when your willpower will be strongest.

Drink smarter: I know myself and cutting out alcohol at Christmas isn’t an option. But there are ways to minimize the damage. I’ll alternate each drink with a glass of water to avoid overindulging (and a painful hangover). I’ll also stick to liquor drinks that are straight or mixed with soda water and avoid sugary cocktails or beer.

Here’s the big one: Don’t eat less if you’re planning to drink. The plan to “save” your calories for alcohol never works and, if we’re being honest, usually leads to getting sloppy off of very little alcohol.

But Harvard scientists explain it a bit more eloquently than that. Because most cocktails contain simple carbs, the spike in blood sugar eventually leads to a crash that makes it far more likely you’ll overeat. Eat a normal amount of food and commit to drinking less.

Avoid mindless eating: When snacks and hors d’oeuvres are spread across the kitchen table, it’s easy to stand there and graze. Remove the food from your sight and reach unless you’re there as part of your meal. Having something to eat before the family gathering starts should help.

The variety effect: This is why Christmas buffets can be lethal. Several studies have shown that people eat more food at a meal containing a variety of foods compared to a meal with just one food, even if it’s their favorite. The variety effect is great for increasing consumption if we’re talking about vegetables, but not with with greasy or high-fat foods.

“Variety has an enormous passive effect on calorie intake,” said Susan B. Roberts, professor of nutrition at Tufts University School of Medicine in Boston. “The higher the variety of items you are confronted with, the more people consume without even realizing it.”

Limit the number of unhealthy foods you expose yourself to by serving fewer types of high-fat appetizers, dishes and desserts. I promise your guests won’t notice if you put out two pies instead of five.

If you’re going to a Christmas gathering, call the host and ask what will be served. Knowing in advance lets you make decisions ahead of time instead of being tempted when you get there. 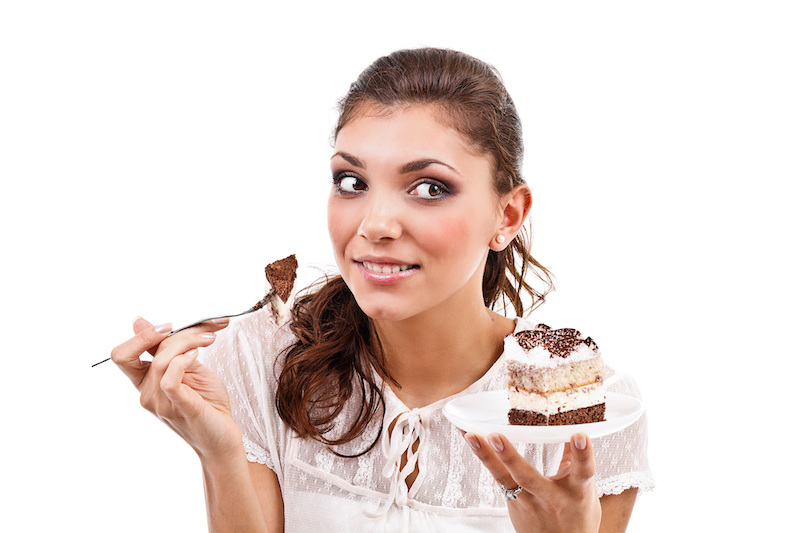 Indulge a little: Now that I’ve laid out all the ways to avoid overeating, here’s the part where I step away from being Scrooge. It’s Christmas. Part of the holiday is about being able to enjoy a Christmas cookie or a candy cane. Any diet will allow for an occasional cheat meal and there’s nothing wrong with cashing that in on Christmas.

The important thing is moderation. Do your part to ensure one glass of eggnog doesn’t become four or one cookie doesn’t turn into the entire box.

Knowing what your daily macro intake will help so much during the holidays. Macros, short for macronutrients, are one of the first thing I discuss with my new clients when we talk about a nutrition plan. There are three primary macros to stay on top of: carbohydrates, proteins and fats.

Proteins: Not only does protein protect your muscle mass, but it also allows your body to repair, build and grow tissues. This is why I always recommend my clients have a protein shake or a protein-rich snack after working out. These include foods such as meat, eggs, milk and cheese.

Getting adequate protein is still possible if you’re vegan. Plant protein sources like nuts, beans, lentils and soy are all healthy options to fill you up.

Fats: The word “fat” gets a bad rap because it’s a necessary part of daily consumption. Fats enable you to store energy and make certain necessary hormones. It’s the type of fats that you want to keep an eye on.

Unsaturated fats are the “healthy fat” and can even decrease your risk of heart disease. They originate from plant sources such as avocados, seeds, olive and nuts. Saturated fat comes from animal products with high fat content and should be limited, while trans fats should be cut out entirely.

Keeping track of your macros helps you stay on top of your meals throughout the day. It also helps you gain awareness of which foods to eat and which ones to avoid. Apps and calorie counting are necessary at first, but the goal is to eventually move to intuitive eating and simply knowing what your body needs.

With that said, there are some misconceptions about macro-based diets. I’m not a fan of the “If It Fits Your Macros” (IIFYM) diet. People who advocate for this diet say you don’t have to count calories if you stay on top of your macros. That’s true to a point, but food quality still matters. Pop Tarts and Cheez Doodles are not good carbs to consume even if you’re doing it within your macro range.

Your daily macro intake will be split among a percentage of proteins, carbohydrates and fats. The macro intake of someone trying to lose weight will be quite different from someone trying to put on muscle. Most diets will still have a good spread across all three. Something like the keto diet, which emphasizes a high intake of one macronutrient (fats) and low intake of another (carbs), is harder to sustain long term.

For those looking to lose weight, here’s the range of what I typically recommend. Clients who train with me get an exact percentage after I measure their body fat composition.

For those looking to bulk up, I recommend something in this range.

You may notice a slight increase of body fat along with the muscle gain because you’re consuming a higher percentage of fat. This is all part of the bulking phase. Once you’ve reached a size you’re happy with, you’ll then proceed to a cutting phase in which your carbs and fat intake are significantly reduced (resulting in becoming significantly crabbier…trust me!)

Another option for assessing your macros is to go off your current weight. If you’re trying to lose weight, Your protein intake should be 0.6 to 0.72 grams/pound if you’re regularly active and as high as 1 to 1.5 grams/pound for athletes. A person who weighs 150 pounds would need 90-110 grams of daily protein if they’re regularly active and 150-225 grams of daily protein if they’re an athlete.

I’m in my early 50s (don’t tell anyone…), so I know what it’s like to track your calories and macros without the help of apps. It wasn’t fun! Luckily the math can now be done on your phone.

MyFitnessPal is my go-to for tracking macros and calories throughout the day. The app lets you scan the barcode of almost any grocery store item to get its full nutritional information. If you’re out to eat, typing in the meal name will also pull up its nutritional information. The custom chart based on data you provide will tell you how you’re currently stacking up on your macro intake for the day.

Some people prefer digital food scales and these are also a good option, but my opinion is that apps like MyFitnessPal, My Macros + or Lose It do the same thing.

Either way, knowledge is power during the holidays. Knowing what you should eat will help you make better food choices and keep you on track with your fitness goals!

Beaverton, OR | Tigard, OR | Hillsboro, OR